We are proud to say that our product is the first and only NMEA 2000 gateway that supports the EVC-A and EVC-MC (Volcano) protocols used in Volvo Penta engines manufactured in 2003-2006, including the popular D3 and D4 series. This update also contains important improvements for other engines.

EVC-MC (also called EVC-A) is very different from EVC-C, EVC-D, EVC-E and other EVC versions, which are very similar at the software level and based on J1939 protocol, widely used in trucks, commercial marine engines and gensets. Unlike the other versions, EVC-A uses the Volcano protocol, widely used is the car market. The 10-year-old Volvo Penta D3-160A-A talks in the same language as the modern Volvo crossovers, and both have a Bosch EDC15 control unit.

The following data is supported in this firmware version: engine revolutions, coolant temperature, boost pressure, battery voltage and engine hours. Engine Gateway must be connected in series with the engine and Helm Interface Unit (HIU). You can do it with our new 8-pin EVC Vodia Adaptor Cable (USD $29), which now contains an 8-pin Y-connector. The connection point is shown by the red circles on the picture below. An adaptor cable with a 12-pin connector, which can be used to connect the Gateway near the HIU unit (blue circle) will be available in beginning of 2017. 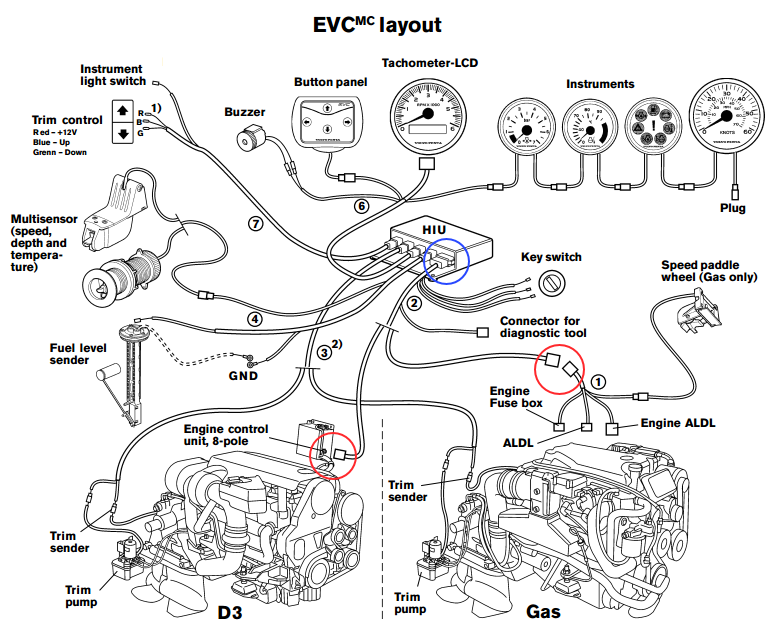 The mulitsensor connector is the same as the 6-pin Deutsch connector used in the gateway, but the wiring is different. To physically connect the gateway to the multisensor port, you should use an EVC-A Multisensor Adaptor Cable purchased separately (USD $29, in stock) or you can disassemble the Device's connector and change the pin order.

Not all BRP CAN fault codes can be mapped to NMEA 2000 engine status, because NMEA has only 24 engine status flags (see Appendix B of the manual). But you can define mapping of additional fault codes with the ALERT_x setting.

For example, to map P1030 to "Maintenance Needed", you should place the following line in the configuration file:

And the last addition to the firmware is support of intake manifold temperature (PGN 65270 / SPN 102 in J1939 and Volvo Penta EVC, also supported in BRP Rotax). NMEA 2000 has no corresponding message. Moreover, many chart plotters have gauges for a limited set of data types.

To work around these limitations, we added the following setting to the configuration file:

where x is OFF (to block the sending of a intake manifold temperature) or a digit from 1 to 252 with the following meaning:

So, you can map this data to your NMEA 2000 instrument gauges yourself.

The firmware update is version 1.10 and is available for download.