New firmware allows collection of data from NMEA 2000 sensors on a engine network, has support for J1708/J1587 adaptors (test series is sent out!), and includes important fixes. 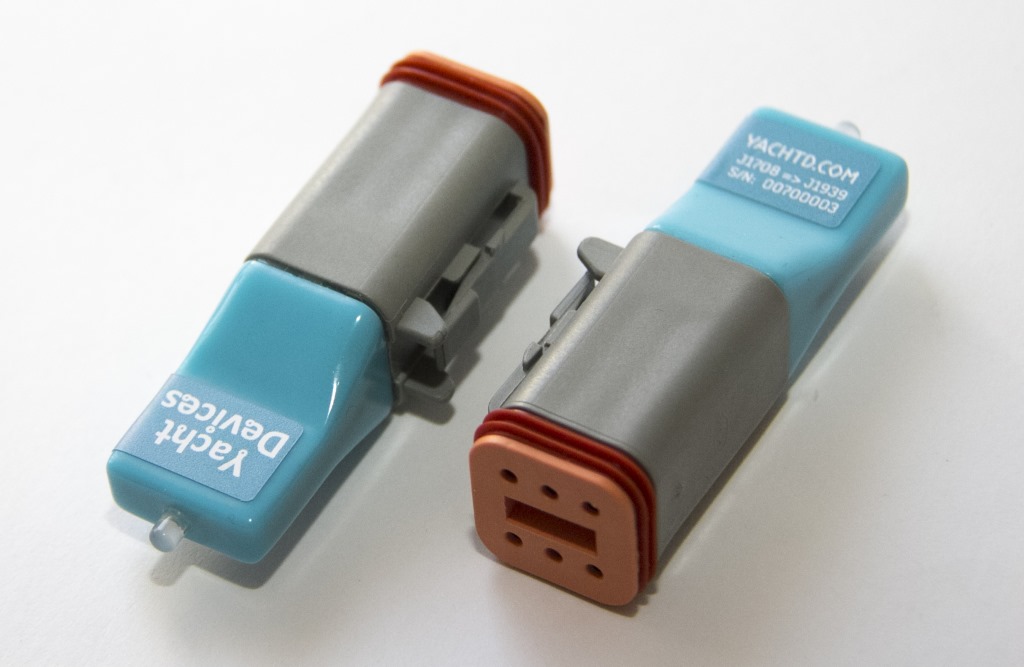 The v1.14 firmware update contains important fixes and is strongly recommend for all users of YDEG, and especially to users of version 1.12 of the firmware.

Along with the fixes, we have added a lot of new features. First of all, there is forwarding of messages from an engine network to a NMEA 2000 network. Many motorboats have NMEA 2000 transducers installed in an engine network, and YDEG allows gathering of this data and display on the chart plotter.

Different devices in these various networks can have matching addresses. And forwarding of such messages can cause conflicts. To avoid conflicts, YDEG can use its own, original address or a specified address as the sender address in the forwarded messages. This is managed by the PASS_ADDR setting, for example:

OFF value turns off the forwarding of messages, with AS_IS messages being forwarded as is (with original sender address). If the YDEG value is chosen, the address of Gateway will be used, or you can set a fixed address in a range of 0..253. The YDEG value is a safest option in the case of forwarding NMEA 2000 messages.

The AS_IS option seems the most dangerous, but if you need to forward J1939 messages, it might be the only proper option. For example, to forward active diagnostic trouble codes from one or multiple engines:

In a J1939 network, devices have fixed addresses (the port engine always has 0 as the address, etc), and forwarding of J1939 messages using the YDEG address serves no practical purpose.

The Engine Gateway does not allow forwarding of messages to J1939 a network from NMEA 2000. It is a silent device on the engine network. If you need to forward messages in both directions, please use our Bridge.

The Engine Gateway supports EDC III and EDC IV engines, and in this version, we have added experimental support of EDC II, which can be turned on with a key:

Volvo Penta engines with EDC II use a J1939 interface for engine synchronization only. This means that the port engine sends actual revolutions, and the starboard engine listens and synchronizes revolutions. Unfortunately, other data are not present on the J1939 interface. You can connect YDEG to a sync cable (yellow/white is CAN HIGH, yellow/grey is CAN LOW) and even "emulate" twin engines for chart plotters:

With the above settings, you can see two engines on your chart plotter, but actually both RPM gauges will show port engine data.

The Engine Gateway has special support for J1708 adaptors, being capable of configuring and updating the adaptor's firmware. We expect that this adaptors will be available for order at the end of June with a set of cables for Volvo Penta engines.

The Engine Gateway firmware update is available on the downloads page.